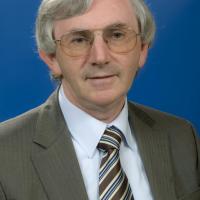 Prof. Dr. Peter KACSUK is the Director of the Laboratory of the Parallel and Distributed Systems in the Computer and Automation Research Institute of the Hungarian Academy of Sciences (MTA SZTAKI). He received his MSc and university doctorate degrees from the Technical University of Budapest in 1976 and 1984, respectively. He received the kandidat degree (equivalent to PhD) from the Hungarian Academy in 1989. He habilitated at the University of Vienna in 1997. He received his professor title from the Hungarian President in 1999 and the Doctor of Academy degree (DSc) from the Hungarian Academy of Sciences in 2001. He served as part-time full professor at the University of Miskolc and at the Eötvös Lóránd University of Science (Budapest). He has been a part-time full professor at the University of Westminster (London, UK) since 2001 and now professor emeritus there since September 2017. He has published two books, two lecture notes and more than 350 scientific papers on parallel computer architectures, parallel software engineering, Grid and Cloud computing. He has given keynote or invited talks 30 times at international conferences. He coordinated four EU FP7 projects (EDGeS, EDGI, SHIWA and SCI-BUS) and two EU Tempus projects (PARCOM and DISCOM). He was the founding president of the International Desktop Grid Federation in 2012. He initiated the establishment of the hybrid multi-cloud system (MTA Cloud) of the Hungarian Academy of Sciences where he has been serving as the technical leader of the project since 2015. He has been member of the Advisory Board of the CloudSME UG (Germany) company since 2016. He is the editor-in-chief of the Journal of Grid Computing published by Springer.