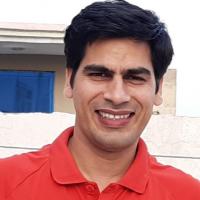 Naresh Kumar is working as Assistant Librarian and In-Charge of School of Engineering and Technology Library at Central University of Haryana since Dec 2016. Prior to this, He has worked for U.S. Embassy, New Delhi as Digital Librarian for a couple of years and as Assistant Librarian at Spice Education for a year. He is also conducting a one-month course on Communication Skills and Personality Development for the University students beside his administrative and academic works. He has been a silver medalist in M.Phil. in Library & Information Science from University of Delhi, India in 2011 and has got distinction in International Master in Digital Library Learning from Oslo University, Norway; Tallinn University, Estonia; and Parma University, Italy during 2012-14, In addition, he is holding bachelors and masters degree in Library & Information Science from IGNOU and Dibrugarh University, Assam. Also, holds a degree in Physics honors from MG University, Kerala, India. He has received Employee of the Year Award by Central University of Haryana in 2019. Further, he has received Best Paper Award at Bobcatsss International Conference 2014 at Barcelona, Spain. He has been awarded Research Data Alliance (RDA) European Early Career Scientists Working with Data Award (Mar 2014) at Dublin, Ireland. He has also received Indian Government’s Most Competitive Junior Research Fellowship by University Grants Commission at the University of Delhi, India during 2010-12. Kumar is the recipient of Erasmus Fellowship by European Union at Parma University, Italy in 2013 and Digital Library Learning (DILL) Consortium Fellowship by Govt. of Norway during 2012-14. Naresh has been accepted for Summer Internship at European Organization for Nuclear Research (CERN), at Geneva, Switzerland for 2 months and also did 3 months Internships at National Library of Estonia; at Oslo University, Norway, and at National Council of Research (CNR), Pisa, Italy for 9 months. Besides this, Kumar has got published 2 books and 17 other publications including research journal papers, book chapters and conference articles with National and International publishers.