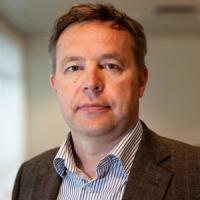 Ari Jolma was born in Turku, Finland in 1962. He received his master's and doctoral degrees in civil engineering from the Helsinki University of Technology (TKK), Finland in 1990 and 1999 respectively. In August 2003 he joined the faculties of Surveying and Civil and Environmental Engineering at TKK as a professor of geoinformatics. Since 2008 Prof. Jolma has worked in the Department of Civil and Environmental Engineering at TKK (since 2010 Aalto University) as a professor of Environmental Planning and Management Information Technology. Mr. Jolma studied 1990-1991 at the Cornell University, USA as a visiting graduate student. From 1994 to 1995 he was a young scientist and a research associate at IIASA, Austria, and from 2002 to 2003 he was a visiting scientist at IDSIA, Switzerland. Prof. Jolma has served at the boards of several Finnish and international academic and professional organizations including iEMSs, OSGeo, RYM doctoral school, and FIUGINET. He represented Finland in the UNESCO IHP from 2003 to 2008 and worked with the World Bank from 1999 to 2001 and in the Mekong River Commission, Cambodia in 2002. He is currently an associate editor of Environmental Modelling & Software.