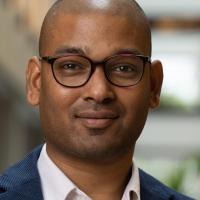 Chinmaya Kumar Dehury is a researcher and teacher by profession at University of Tartu, Estonia, since 2019. Prior to his academic career, he received his bachelor degree from Sambalpur University, India, in June 2009 and Master in Computer Application (MCA) degree from Biju Pattnaik University of Technology, India, in June 2013. In Fall 2013, he joined Future Ubiquitous Networking (FUN) Lab at Chang Gung University as a Master student under Prof. Prasan Kumar Sahoo. The lab is now changed to Artificial intelligence and Big data Computing (ABC) Lab. In Fall 2014, he upgraded the Master program to PhD program and received his PhD Degree in Jan, 2019 in the department of Computer Science and Information Engineering, Chang Gung University, Taiwan. Currently, he is a postdoctoral research fellow in the Mobile \& Cloud Lab, Institute of Computer Science, University of Tartu, Estonia. His research interests include scheduling, resource management and fault tolerance problems of Cloud and fog Computing, the application of artificial intelligence in cloud management, Internet of Things, and data management frameworks. He is currently involved in RADON project, which is a 4 million euro project funded by European H2020 program and co-ordinated by Imperial College London. He is mainly responsible for designing and developing an open-source data management solution for serverless platforms that will be contributed to the TOSCA standard. Hence, another dimension of his research also revolves around the data pipeline in edge and cloud computing. Along with the research activity, he is also voluntarily involved in teaching activities. He gives lectures on cloud computing, IoT, Fog computing. He has currently developed a new course, “DevOps: Automating Software Delivery and Operations”, that will be delivered starting from 2021/22 Fall semester in the Institute. The primary objective of this course is to provide the basic understanding of core principles, practices and tools of DevOps. This course covers DevOps automation practices and tool categories including GitHub/GitLab, Jenkin, Ansible, OpenStack, Docker, OpenAPI, Prometheus, and many more. He is a member, IEEE, and also a reviewer to several journals and conferences, such as IEEE TPDS, IEEE JSAC, IEEE TCC, Wiley Software: Practice and Experience, etc. Chinmaya Kumar Dehury was born in Deogarh, a small District in Orissa state, India. Doing research and sharing knowledge is the core philosophy of his life. He believes that teaching is the only way to carry-forward the current advancement of the research community to the next generation and by doing so, we would be able to nurture the next generation researchers.