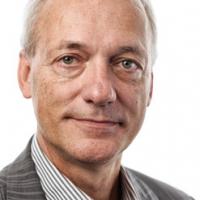 Marc Dupuis grew up in Rotterdam and studied English and Slavic languages and literature at Leiden University. Towards the end of the seventies of the last century he also became interested in computers. In the mid-eighties he did research in the area of computer linguistics. He received a Ph.D. in experimental phonetics in 1988. From 1987 till 1997 he worked at the Computer Department of the Faculty of Humanities at the State University of Groningen. At that time he started doing IT related project management. Back in Leiden University he was Director of the joint IT Department and Language Laboratory at the Faculty of Humanities. In 2001 he moved to the university’s Central Office to become Leiden’s e-learning programme manager and policy advisor. In 2010 he joined SURF, where he was asked to take over the coordination of SURF’s e-research programme. In this programme SURF supports its members, i.e. all Dutch higher education organisations and university medical centres as well as and a number of research institutions, in innovations with the help of ICT. Marc is member of various committees and steering groups dealing with e-research. One of these is the Knowledge Exchange initiative, a consortium of SURF and sister organisations in Germany, the UK, Denmark and Finland. Marc has also been engaged in several European EC and other international projects including eInfraNet, SIM4RDM, OpenAIRE and OAPEN.