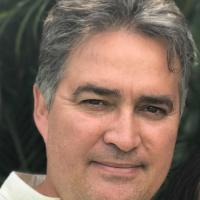 Yannick Hoarau is an aeronautical engineer (ENSICA, Toulouse, France) who obtained his PhD on the numerical simulation of unsteady turbulent flow in 2002 in Toulouse, France. He was appointed as an assistant professor in fluid mechanics in 2005 in the faculty of physics and engineering of the University of Strasbourg and affected to the IMFS laboratory (which became the ICube laboratory in 2013). He became an associate professor in 2011 and full professor in 2015 at the University of Strasbourg. Currently he is the head of the mechanics department of the Icube laboratory, one of the four departments of the laboratory with 95 permanent researchers, 70 PhD students and 20 post-doc within four teams. Since 2019 he is also deputy vice-president for research of the University of Strasbourg working on Research Data and Open Science. His fields of expertise are : computational fluid dynamics, high performance computing, unsteady turbulence modeling, shock waves – boundary layer interactions, fluid – structure interactions, particle deposition, two-phase flow, icing modeling.