Helsinki, Notebooks and the CODATA-RDA schools

Looking back over the RDA plenaries I've been lucky enough to attend 8 out of the 14 of the plenaries. In that relatively short period of time the RDA has undergone a transition from being an enthusiastic meeting with less than precisely defined goals to a major venue for data professionals creating a huge range of different outputs; from education (for example the CODATA-RDA schools) to FAIR data maturity models to PID's for Instrumentation to Open Science Graphs for FAIR data. The RDA, on the one hand, is providing useful and effective outputs that are enabling its overall goal of improving data sharing. On the other it is a venue where dialogue is much more important that monologue. It is as much about geting feedback from the data professional community as it is about presenting work.

The first meeting I attended was one for those Early on in their Careers where I was initally on a panel and then was involved in a "speed-dating" type event where I had short one-to-ones with people who attended the meeting. This was a great session and a good way to start the plenary. What was interesting about this meeting was how quickly the meeting got to specifics - specifically questions on DMP's. I hope we'll see more of the people who attended this meeting continue attending plenaries.

The next big meeting for me was a BoF on Computational Notebooks.

There are now over five million notebooks, such as Jupyter, stored on GitHub alone.

Let that sink in for just a minute. Five. Million. Notebooks.

Many seminars I've encountered, for example at EOSC, make an impassioned plea that whatever we do we must keep the user (i.e. the research community) in mind. If notebooks aren't a relevant example then I'd really really really like to see an example of one that is!

Patricia Herterich has already provided an excellent summary of that meeting. A more detailed summary of the meeting can be found here. In essence there are four areas where the RDA could make a contribution :-

Despite the fact that notebooks are a very crowded field (there are many individual conferences and workshops on this topic) the unique composition of the RDA means that it can make an effective to this area. We have already submitted a proposal for another BoF for the next plenary and are in the process of writing an IG proposal on this.

Finally, there was the IG meeting on the CODATA-RDA schools. The focus of this meeting was to report on the new strand on Data Stewardship that was run at Trieste this year with the support of FAIRsFAIR . This pilot for 6 students allowed us to explore what is the best curriculum for this topic. The workshop at Helsinki allowed us to report back on the curriculum, the experiences of the instructors and students of the school and what can be improved. Overall those who attended were happy with the curriculum. On the other hand, what was clear that there needs to be greater integration between the ECR's and the Data Steward students. One suggestion here was to form teams of ECR's during the school and embed a Data Steward into each team. This feedback is invaluable.

Rob Quick finished the workshop with a plea to the community to get more involved in the schools - please get in touch with us!

Dublin was, I think, my favourite plenary and indeed remains so - this was the plenary where the CODATA-RDA schools got started. But Helsinki surpassed Dublin in many other ways. Being Irish, I hate to say it, but yup the music was better (both at the conference and conference dinner). I was a fan of Aki Kaurismäki's "Leningrad Cowboys Go America" but I hadn't realised that deadpan humour is something of a national sport in Finland. Soon after the conference finished the following billboard appeared in Helsinki. 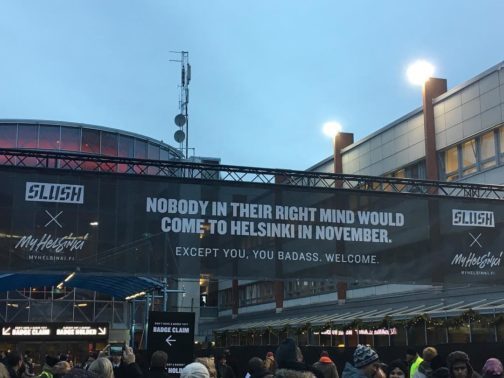 This is entirely wrong.

Helsinki - you're the badass. And You Rock.

By Kathleen Fontaine on 02 December 2016

There are 0 comments on "Helsinki, Notebooks and the CODATA-RDA schools".