“Libraries are great matchmakers”, tells me Joshua Sendall, the Research Data Manager at the Lancaster University Library, as we get ready for the 7th Data Conversations on 18th February.

Our first job was to go and grab the pizzas from the campus pizzaria. Pizza, I learned, is an important part of Data Conversations. As we later walked inside the room carrying several boxes of pizzas each - and filling in the air with the tempting smell of cheese, tomato sauce, and crusty bread - researchers greeted us with a smile, knowing they were in for a treat. Some of them would joke with me later tongue in cheek that they had only come for the pizza. 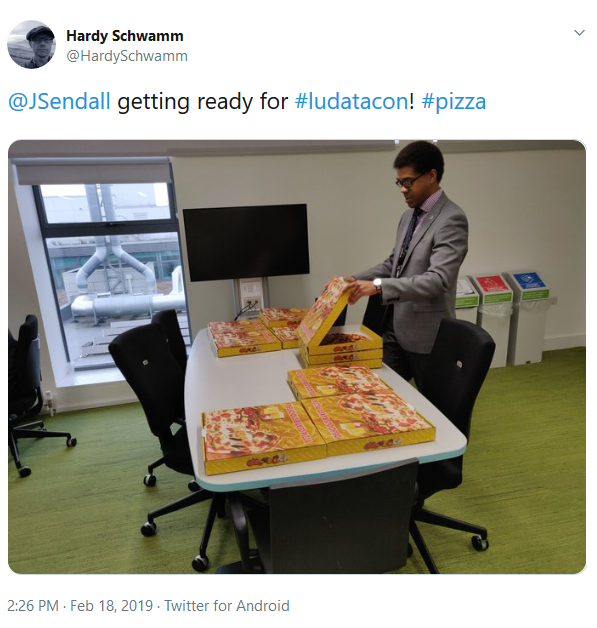 I had come from Amsterdam for the day to see first-hand how Data Conversations bring the Lancaster research community together to discuss research data management (RDM) issues. The topic for the afternoon was "Research Data: The Best Laid Plans", and the programme promised to cover topics such as how to go about preparing for data collection and data creation when developing a research project, and how to identify and re-use existing datasets.

Data Conversations is an innovative researcher engagement concept honed through seven editions by the Digital Innovation and Research Services from the Lancaster University Library. These are events that last two hours and bring together researchers, research support staff, and data management experts from the Library.

Data Conversations always start with an informal free lunch of pizza for all attendees, followed by a mixture of short talks and panel discussions on current RDM topics. Around half of the talks are invited, the other half being proposed by the researchers themselves through an open call. The topic for each event is decided based on feedback from participants. For the event I attended, Joshua Sendall, the lead organiser worked with a few researchers who had attended previous Data Conversations to define the topic and the programme. Researcher engagement and participation is both a goal and an integral part of Data Conversations.

On February 18th, we heard from four Lancaster University PhD candidates: Irene Kyomuhangi, Mathew Gillings, Andressa Rodrigues Gomide and Craig Jones. The topics of their talks were very broad, not just in terms of the research areas they covered, ranging from malaria research to detecting lies through linguistic analysis, but also in their connection to RDM and the specific topic of the event. For most of the talks, the main focus was on the research topic they covered. Two of the talks did address aspects of data collection, data analysis, and data reuse, and one talked focussed on how to overcome adversity when data collection in the field doesn’t go according to plan. Another talk put a spotlight firmly on the pitfalls and opportunities of interdisciplinary research without making much reference to RDM.

On balance, it did strike me how little reference the speakers made to RDM or research data at all during their talks. However, RDM featured heavily during the discussion and the question and answer sessions. The participants, who were mostly early career researchers, asked about and gave each other tips and advice on a wide variety of RDM topics, such as version control, data storage and data archiving, open source software, and data anonymization. They also talked about failure and what that means in research, the impostor syndrome, the pressures faced by young researchers and mental health during PhD research.

Joshua Sendall explained to me after the event that he tries to steer the topic and the discussion towards RDM, but RDM is not the focus of Data Conversations. As he puts it: “Data are foundational. They are always there underlying the research. Research stands upon foundations of robust and reproducible data. The scholarly discourse is based upon that data, and as such, data is always present in Data Conversations.”

As an organiser, he doesn’t give much direction to the speakers, and he allows participants to focus on their research and what they find interesting and important. This is perhaps what makes Data Conversations such a great success. It provides a forum for researchers from different departments from the university to come together and present their research and their struggles in a friendly and relaxed environment. This may be particularly important for PhD students, who may lack such opportunities elsewhere. 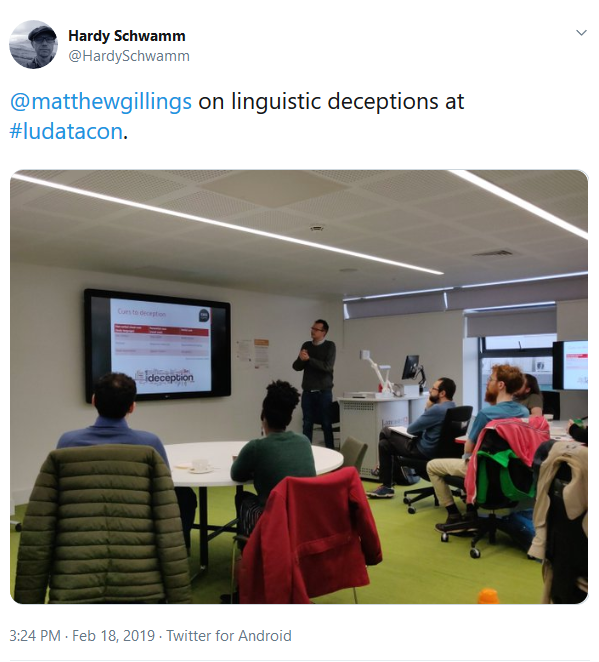 When I asked some of the participantes what brought them to Data Conversations, they laughed loudly and mentioned the pizza. But this was not the real reason they had come in, as I gathered from further interaction with them. An interest in all things data, data science, and open research was obvious from their answers to my questions and the conversations I heard them having among each other. However, I found their eyes really brightened when they said they had come for the opportunity to exchange ideas with PhD students and researchers from other departments. Doing research can be isolating, they explained. And, besides, they added, there might be others who face the same problems, and who may have solutions they haven’t yet thought about.

To me this seemed to be the power of Data Conversations, that it provides a neutral space, which cuts across the boundaries of the faculties and disciplines, where researchers can make new connections and learn from each other, supported by experts from the Library.

Libraries are indeed great matchmakers. As put eloquently by R. D. Lankes in his book “The New Librarianship Field Guide”: “Librarians can identify experts and work with them to provide expertise to everyone. All the while knitting together the community in a tight fabric of knowing.” However, as Lankes warns in his book, “we must start with where people are now. (...) build from what they do now (a reflection of what they believe) and help move them to where you want them to be.”

By Maria Christoforaki on 02 October 2013

In Finland as an RDA Europe Ambassador for Engineering/Renewable Materials

By Kathleen Fontaine on 08 November 2016

There are 0 comments on "Building Connections through Data Conversations at Lancaster University".