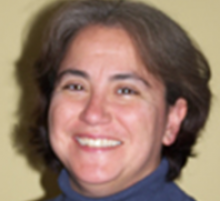 Senior Software Developer and Architect, Perseus Digital Library, Tufts University
Bridget has worked in software development since 1994, in roles which have covered the full spectrum of the software development life cycle, focusing since 2007 in the fields of language study and digital humanities.  She has designed and developed multiple applications and services deployed in various SOA environments, and her skills include the programming languages Java, Javascript, XQuery, XSLT, Ruby and Perl, as well as broad experience with databases and XML technologies. She has served as the technical lead on various projects and has extensive experience in project management.
In her current role at Tufts University, Bridget is the lead software developer and architect for the Perseus Digital Library. In this role, she has represented and contributed on behalf of the Perseus Digital Library on several multi-institution projects, including the Bamboo Project funded by the Mellon Foundation, the Libraries and the Transformation of the Humanities funded by the Institute of Museum and Library Services, and NEH/DFG Bilateral Digital Humanities-funded Hellespont Project. Starting September 1, 2013, Bridget will be the lead developer on The Perseids Project, a two-year project funded by The Mellon Foundation to expand the Perseids collaborative editing platform with support for use cases including classroom collaboration on digital editions, scholary curation of texts, and development of dynamic syllabi.
Bridget also has a background in the study of foreign languages, including French and Mandarin Chinese and is one of the primary programmers and founding board members of the open source Alpheios Project, developing tools and resources for the study of classical languages.
Facebook LinkedIn Twitter